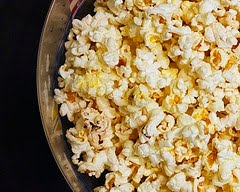 Its finally happened. I’ve become addicted to something. Popcorn. I don’t know how or why it happened. The days turned cold, the holiday shopping nerve-racking, my dwindling social life unbearable, and somehow, popcorn just seemed to make it all go away. It began as so many other addictions. Occasionally as a special treat. But as my roommate and I grew increasingly intoxicated by the warm bowl of comfort, we spiraled out of control. Once a week became 3 which then lead to a daily snack. I tried to make rules- Popcorn can only be consumed on nights we watch a movie, not television. But there were loopholes. “Oh look, there’s 20 minutes left of Elf on HBO, hurry there’s still time!” Or one of us would make a bowl regardless of what was on and the other would exclaim in weak protest, “but it’s not a movie night!” as they sunk their hands greedily into the bowl of savory goodness. Now you’re probably thinking, “what the hell is she talking about, it’s just popcorn!” But you’re wrong, because I’m not talking about just popcorn, I’m talking about yeasty popcorn.

Ok I know that may sound gross but I promise, it isn’t. This popcorn is absolutely delicious and has been around since Hippies roamed the earth. The yeast which gives it a bold and nutty flavor is high in protein and vitamins making this a healthy snack, especially since it is cooked on the stove with olive oil and not in a chemical filled bag in the microwave. So the next time you are craving a cozy movie night, be adventurous and follow this simple recipe below.

Yeasty Popcorn Recipe
(for every day of the week)

1. In a medium pot add oil over medium high heat. Heat for 1 minute
2. Add in popcorn kernels and shake pot so kernels are coated in oil. Cover with lid leaving a small gap for air to escape
3. Stay by the pot and wait for the kernels to begin popping
4. When the popping slows, turn of the heat and place the popcorn in a bowl, season with salt, and add yeast. Shake the bowl so the salt and yeast are evenly distributed.

4 thoughts on “Kernels on my mind”

Welcome to a little piece of me.