What’s so great about apples? I don’t get it. Apples are boring. You eat an apple when there’s nothing better. It’s a last resort fruit, like last resort panties. If a genie popped out of a magic lamp and told you that you could have any fruit in the world, would you choose an apple? No. Apples are depressing. They’re the fruit they sell in airports and give away in hotel gift baskets. It’s the fruit you get at cheap buffets and prepaid lunches. Apples always disappoint. 90% of the time they’re grainy, mealy or rotten. Apples are sneaky. I spend 20 minutes giving an apple my sensual apple exam. I look it over, feel it up, breathe in its scent and if no one’s watching, I lick it. Apples lie. They say, “pick me baby, ooooh I’ll be so delicious and crunchy. Not too sweet, not too tart, extra juicy for you.” I believe it. They suck me in with their ruby red skin and hard firm body. I take it home, expecting at the least a solid crunch, some sort of sensual delight. Instead I get a soft, dry, mealy mouth rape. “That’s not what you promised me” I scream. “Hehe” the apple chuckles, “shut up and core me”. 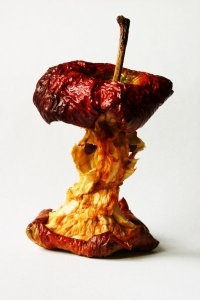 When did apples become the Oprah of fruit? They’re everywhere. Fairytales, teachers’ desks, apple pie, apple strudel, apple bob, apple computers, Johnny Appleseed, Isaac Newton and the apple, the Big Apple, apple of my eye, Apples to Apples, Applebee’s, Gwyneth Paltrow’s child!? Jesus! What’s wrong with people? What about the orange? He’s part of a complete breakfast. You don’t hear of celebrities naming their children kiwi, cherry, or kumquat. What city calls itself the Big Berry? I don’t get it. Apples are cliché. Give your teacher an apple? Yeah, if you hate her.

Apples are supposed to be the best defense against illness. That’s what my doctor told me the last time I saw her. “An apple a day keeps the doctor away” she sang. I followed her advice for 2 months and forced an apple down my gullet daily. I went to visit a friend in Boston who had just come down with the swine flu. She told me to cancel my trip but I wouldn’t hear of it. “Don’t worry,” I said as I boarded my flight. “My doctors got me on this crazy strict optimum health diet”. Two days later I’m on my back sweating like a pig and hurling apple chunks. 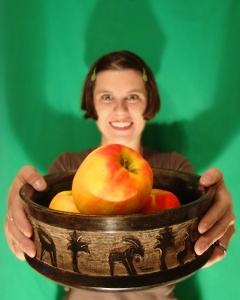 Let me remind you, apples are bad. Ever heard of a poisoned apple? Eve ate an apple and betrayed Adam, God and humanity. What a foul fruit to screw all of humanity. Because of the apple we’re not living the naked rumpus life God intended. That’s ridiculous. Am I missing something? Who ever heard of anyone not being able to resist an apple? Oh wait. Snow White. Didn’t she die after eating one? If you ask me, apples are the Mel Gibson of fruit.

One thought on “Bad to the Core”

Welcome to a little piece of me.